When I was a kid, Christmas was that time of year that meant school Christmas plays and church pageants. We often got out of class to practice our songs and rehearse our lines if we had any. I never had lines. I was always one in the chorus. I was happy in the chorus, it’s were all the fun was at! The idea of speaking in front of anyone terrified me to the core of my being. Year after year, the same kids usually had all the speaking parts, which was just fine by me. I learned later that the word for this is “introvert”, but that is a separate blog post. So, I’d sing my little heart out and mean it as long as others were singing too and I didn’t have any lines. 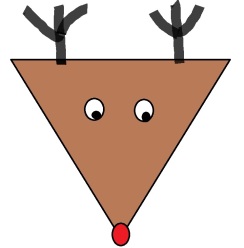 our parents. The halls were decorated with our Christmas art work that parents could peruse and find their kid’s work proudly displayed on the wall. Last night as I was trying to sleep and random thoughts kept popping up in my head, I remembered the time, probably in the second or third grade (at least I sincerely hope I was that young), we made reindeer heads and antlers from construction paper. The head was a triangle and you probably can guess that the point is were the nose should be.

That is not where I put the nose. It made more sense to me to put the nose in the middle of the reindeer face. I mean, think about it, my nose isn’t on my chin, right? No, it’s in the middle of my face! So, I stuck it in the middle, like a reasonable artist, and I made the deer smile. My deer was happy that it was Christmas because he got to fly! He looked like this: 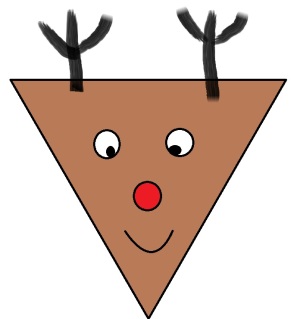 It wasn’t until my deer was hung up in the hall with all of the others that I realized my huge mistake. All of the other kids, and I mean ALL of them, put the nose on the point. None of those deer were smiling either. These were very serious reindeer. They knew the importance of Christmas night and they were ready for it. I, on the other hand, had screwed up my deer and everyone could see it! I was totally mortified.  And now my parents could see it too! In fact, EVERYONE could see how inept I was at deer artwork. There was no way to hide it, my flawed reindeer was already up on the wall. I was a craft fraud and soon everyone would know it!

My parents thought it was cute and had the good grace not to say something like, “What the hell, kid?!” Though I suspect my dad probably thought it. My dad is a bit like the Peter Boyle character in Everybody Loves Raymond.

“You’re even dumber than I tell people.”

I learned to love my nose deformed reindeer over the years and it was certainly a good lesson that it’s okay to color outside of the lines. It’s also a great reminder of how children think and how seriously these little things can get to them. What experience have you had as a kid that embarrassed you? Did you think it was the end of the world? Leave your stories in the comments.

It was about 3am in the morning and instead of sleeping I was looking through a Christmas cookbook that Lisa and I picked up at a thrift store. I started paging through it at midnight, thinking that I’d get a few good ideas for the holidays. Three hours later, and I found a recipe for succotash. Not a particular favorite of mine for containing one of the most offensive non-bean beans on the planet: the lima bean. 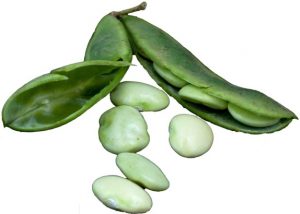 In that third hour of the morning, it struck me that I was never comfortable saying the word “legume” and this discomfort extends to my childhood. I was taught, as most of us were taught, to sound out a word that you’ve never seen or heard before, rather than just asking an adult for help. So, I did and the sound that came out didn’t seem right to me. At this point I should say that I actually sounded it out correctly. It just didn’t sound right to my child ear. It sounded stupid. I was the type of kid that was easily embarrassed, so I kept this stupid sounding word to myself for decades. What harm could it do? I mean, how often does anyone need to say “legume” in their life? Not often. Especially if “lima bean” will do, right? But then I found out that peanuts, peas, chickpeas, and all sorts of beans and nuts were part of the legume family and that I may actually need to use it in casual conversation one day.

It was time to just bite the legume and have it out. Out loud that is. 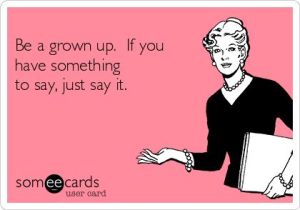 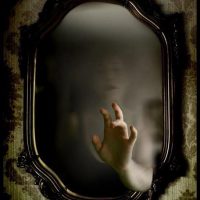 When we’re children, we get mental fixes in our heads that we can’t always overcome even as adults. It may seem completely inane to hold onto it once we grow up and understand the irrationality of it, but the mind does what it does. I’m still afraid of mirrors after midnight to this day because of an urban legend about Bloody Mary that my cousin told me about in graphic detail. I was about ten years old. I know nothing is coming out of that mirror. I mean, it’s not even silver backed, and I think it has to at least be silver backed before a portal opens from Hell. Those are the rules.

So tell me, is there any word out there that you don’t say just because you think it sounds stupid or you think you won’t pronounce it right? Or do you have any fears from your childhood that just won’t let go even though you’re in your forties now? Let me know in the comments, I’d love to hear about it!

Everything in its Place

What Day is It, Anyway?